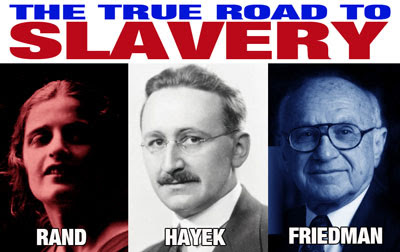 In 1864, there were four million slaves in the United States. The world was outraged.

By one estimate, there are eight million child slaves currently, and as many as 30 million slaves of all ages. Few give a damn.

For the past thirty years, free market ideology has ruled the globe. During that time, neo-liberal policies have vastly increased slavery throughout the world. The slave glut has caused the per-unit cost to go down.

The modern-day slavery expert explained to CNN that the current $90 rate for a human slave is actually at an historic low. Two hundred years ago, a slave cost about $40,000 in today’s money.

And which industries are these slaves in? Well the ones you might expect of course –- prostitution and sweatshop manufacturing. But they also occur in industries you might not associate with slavery – coffee and tea trades, food processing and even health care....

One of the worst slave-pits in the world is Dubai. Virtually everything created there was built under inhuman conditions. And guess who is opening up a residential development in Dubai? Tiger Woods. Last month, when Woods played at the Dubai Desert Classic, he was roundly condemned -- for spitting on the 12th green.

The connection between neo-liberalism (which I have sometimes called Milton Friedmanism) and slavery is outlined here (pdf).

Furthermore, as Charles Jacobs, President of the American Anti-Slavery Group, refers, today's slaves are often no better off than their more familiar predecessors. Indeed, in many cases, their lives are more brutal and hazardous... Not only slavery is a rapidly growing problem, in addition we find that this is a situation that prompts more cruelty than ever before...unlike the slaves of the past, the new slaves are not seen as long-term investments. Instead, slaveholders view them as cheap, requiring little care, and in the end, disposable. But one thing remains the same: violence. People are still taken by force and held against their will through fear.

Do the teabaggers care about the raise of slavery throughout the world? No. And for all the Islam-bashing in which they've engaged, American conservatives never (or rarely) mention the slaves of Dubai.

Both published their anti-democracy proclamations in the same billionaire-Koch-family-funded outlet, Cato Unbound, one of the oldest billionaire-fed libertarian welfare dispensaries.