Digby links to this piece by Nancy Altman which explains why Obama's compromise plan poses a veiled threat to Social Security.

Altman argues that the payroll tax rollback -- which sounded so attractive at first (even to me) -- will likely become permanent. Obviously, in one year's time, any politician who tells workers "I'll raise your payroll taxes to their previous level" will get clobbered. If we can't rescind Bush's tax cut for millionaires (despite public support for such a move), how can we justify raising taxes on Laura and Larry Lunchbox?

Payroll taxes pay for Social Security. Obama wants to make up the shortfall by taking money out of general revenues. But that trick won't work for long.

Worse, less money will be available for all sorts of other stuff -- such as college grants. Result: America will continue to slip behind the rest of the world in terms of education and technology. (Competing countries support ambitious students. That's why Germans make better stuff than we do.)

I am reminded one of the key economists advising Obama during the campaign, Jeff Liebman -- now the Executive Associate Director of the Office of Management and Budget. He has long advocated privatizing Social Security -- that is, subjecting Social Security to the great casino atmosphere of the stock market.

Let's take a look at Jeffrey's 2005 piece in Harvard magazine.

How many workers saw their retirement accounts wiped out by the Great Recession?

"Personal retirement accounts." The phrase sounds nice. It means investing retirement funds in stocks and bonds. Advocates say that the investments will be conservative. Alas, that word no longer means what it once did.

Liebman admits in his 2005 piece that there are three groups stumping for Social Security privatization. The third group is (he admits) particularly worrisome:

The third group believes that Social Security was basically a mistake in the first place — that it is not the government’s job to provide for retirement, beyond perhaps a minimal welfare program. For this group, the mixed plans under consideration are the first steps toward total privatization.

The Bush administration appears to be dominated by people in the last two groups. Moreover, in promoting the virtues of PRAs, the Bush administration has not been forthcoming about the benefit cuts and revenue demands of its approach. Instead, it has emphasized features like "choice," voluntary participation, "ownership," and inheritability — features that make Social Security reform appear painless and that are directly at odds with the social-insurance aspects of the current program.

Members of that third group may well be in charge of both Congress and the White House after 2012 -- no matter who gains the Democratic nomination. Thus, the phrase "Don't privatize Social Security!" must remain a core Democratic principle.

Liebman's piece argues that the Social Security shortfall won't hit until 2050, "around the time this year’s Harvard seniors reach retirement." Politicians know that most people don't think that far ahead. But after the payroll tax cut has been in place for five years or ten years, the sense of urgency will be palpable. To put it simply:

Screw the states. Here's another trojan horse within the Obama-GOP "compromise":

Congressional Republicans appear to be quietly but methodically executing a plan that would a) avoid a federal bailout of spendthrift states and b) cripple public employee unions by pushing cash-strapped states such as California and Illinois to declare bankruptcy. This may be the biggest political battle in Washington, my Capitol Hill sources tell me, of 2011.

That’s why the most intriguing aspect of President Barack Obama’s tax deal with Republicans is what the compromise fails to include — a provision to continue the Build America Bonds program. BABs now account for more than 20 percent of new debt sold by states and local governments thanks to a federal rebate equal to 35 percent of interest costs on the bonds. The subsidy program ends on Dec. 31. And my Reuters colleagues report that a GOP congressional aide said Republicans “have a very firm line on BABS — we are not going to allow them to be included.”

To which Naked Capitalism adds:

This GOP strategy sounds troublingly similar to the famed scene in Blazing Saddles where the new black sheriff, getting a less than welcome reception from townspeople, threatens to shoot himself. The GOP is willing to shoot the economy to precipitate a crisis with the hopes of forcing the most favorable resolution possible to a long-standing desire of theirs.

I'll take it even further. In their hearts, libertarians wish to undo the American experiment in democracy. They even sometimes admit this fact in public. Sharron Angle debagged the feline when she bluntly admitted that the problem with democracy is that the people will sometimes allow the "wrong" things to happen -- things like Social Security, Medicare, the EPA, public education and unemployment insurance. Libertarian ideologists cannot tolerate such affronts, which will continue to exist as long as voters retain the vote and the state remains in non-crisis mode.

The only way to create a Somalia-like libertarian "utopia" is to destroy politics as usual. Embrace carnage. Create chaos. Shock and awe.

Today's "conservatives" are not conservative. They are radicals. They want America dead so they can start over.

The "trojans" in the tax cut compromise will further that goal.

In the past, I've chided Obama for attending Occidental, a private school for rich kids in Los Angeles who don't have the grades for USC. It would have been far more appropriate if Obama had gone to the latter school. USC's mascot is Tommy Trojan. 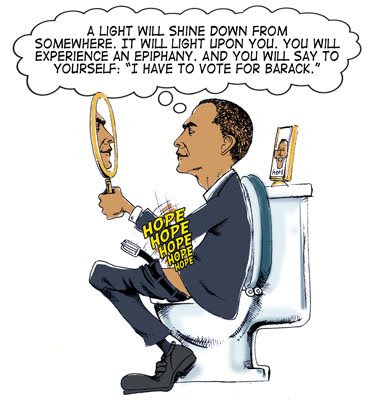 Added note:
Here and here, Paul Street discusses his personal encounters with Obama back in Chicago.

Vastleft: "Not my cup of tea!" is intriguing. What was your first-hand experience with the future president?"

Paul Street:
Gruff. Arrogant. Widely perceived as distant and know-it-all and arrogant and narcissistic in black Chicago... and that's exactly how he seemed in my early interactions with him. Obama was considered all Hyde Park/U. Chicago and downtown/business/Daley... not especially close to the mid-South Side ’hoods he represented in Springfield.

He's not nice on a personal level - not afraid to alienate and tell you to go eff yourself. I remember from Chicago. Not like he was some kind of guy you could bully. I don't really get into the spinleless narrative. I think he's really conservative. And I think he's very narcissistic, which is of course a common trait among politicians. He wanted and got the presidency and was more than willing to cut deals with the people who could make that possible...with the plutocracy. They vetted him carefully and well.