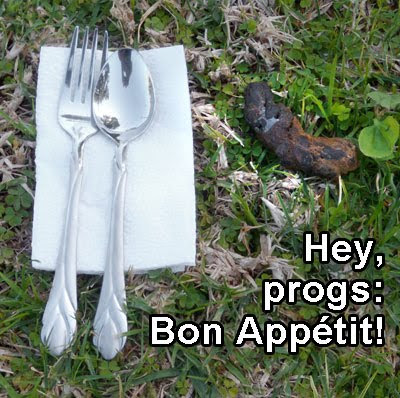 My dog Bella has disgorged a perfect rejoinder to you brie-and-chablis "progressives" and your perma-smirk attitude toward us working-class, old-school liberals.

You ruined the Democratic party by creating a false Messiah out of a Republican-at-heart who had dressed himself up as a progressive populist. You accused us of racism simply because we saw through that man's deceit long before you did.

And you still refuse to admit that you did anything wrong in 2008.

Get used to the taste. You'll be eating a lot of the stuff -- and you have no power to change history's harsh judgment.

The only way to ameliorate the foul flavor is to gargle with a mouthwash called "HUMILITY." But I suspect that you arrogant fucks would literally rather die than use such a rinse.

By the way, Kossacks, your pathetic attempts to pretend that the primaries are ancient history will fool no-one. The past isn't dead -- it isn't even past, as long as your man is in the oval office. You remind me of that recurrent gag in the Simpsons -- the one where Homer creates a calamity and then tries to excuse himself by saying: "Now, let's not play the blame game...."
posted: 2:50 PM