Joe Lieberman is going to oppose cloture if the final bill contains the "Medicare at 55" provision. 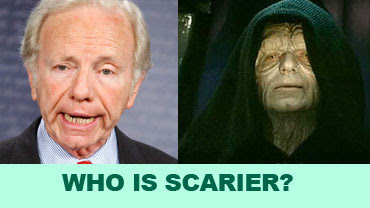 On one hand, Lieberman is an asshole. You know that and I know that. Also, I am closer to the proposed new Medicare eligibility point than you probably are -- and that factor has started to affect the way I think about this legislation.

On the other hand, I'd like to see this bill get more than 50 and fewer than 60 votes. We need a real filibuster, because only under those circumstances can the Senate rewrite the rules in order to get rid of the whole idea of the filibuster.

On the third hand: I'm guessing that Reid fears to take that step -- tossing aside the filibuster -- because he wants the Democrats to maintain filibuster power when the Republicans get back into power. And maybe that's a valid point. If the minority-power Dems did not possess the filibuster, might we not have had (say) a net neutrality law in 2006?

On the fourth hand: I work freelance, and this is not a freelancer-friendly piece of legislation.

On the fifth hand: If I actually had five hands, just imagine the amount of work I'd get done!

(I'm curious. Does anyone know of any polls indicating how popular Lieberman is these days in Connecticut? I cannot believe that the voters are still happy with the guy.)

More proof that Obama is not on your side: The White House is behind the move to destroy Senator Byron Dorgan's amendment to allow for the importation of cheap drugs from Canada. Obama's FDA claims to be bothered by "safety concerns" -- the usual dodge.

Obama's new stance places him well to the right of John McCain, who strongly favors allowing the importation of drugs from Canada.

What we are seeing here is a direct and irrefutable betrayal of an oft-repeated Obama campaign promise. Remember that naive era known as 2007, when ideals were fresh and anything seemed possible? Here is what Senator Obama was saying back in June of that year:

Democratic presidential contender Barack Obama speculated Saturday that his prescription drug plan could save seniors on Medicare $157 billion over the next decade.

The potential saving is proof that the nation needs to change the Medicare system, he said.

"There is no reason for this other than the fact it makes the drug companies more money," said Obama. 'It's wrong that Americans have to spend more for their prescriptions because drug companies can spend billions on lobbying."

The prescription drug plan pushed by Obama would allow Medicare officials to bargain for lower prescription drugs prices, allow Americans to buy prescriptions from Canada and other developed countries where safe drugs are available and increase the use of generic drugs in public health programs like Medicare.


In this instance, I don't even have the luxury of being able to say "I told you so," since I did not yet have Obama clocked in June of 2007. Let's continue to quote from that story, which seems so astonishing in light of current events:

At a series of appearances across Iowa, Obama cited a study conducted by his campaign that compared drug prices paid by Medicare to those for patients in the Veterans Affair system, those getting drugs from Canadian pharmacies and online pharmacy providers.

Obama, a first-term Illinois senator, said his study found that Iowa seniors on Medicare pay 71 percent more for prescription drugs than do VA patients and 47 percent more than those who get drugs at Canadian pharmacies.

Dig: His own campaign conducted the study. At that time, he didn't voice any concerns about safety -- because he knew, as we all know, that these drugs have already received FDA approval.

"The drug and insurance industries spent $1 billion over the last decade on lobbying and campaign contributions, and so when the Medicare prescription drug bill came up a few years back, they found more than enough friends in Washington who were willing to do their bidding," Obama said.

We must therefore presume that the "finance factor" explains President Obama's change of tune.

Guess who now describes Obama's "betrayal" on this issue as "disgusting"? It's little Davey Sirota! Yes, the very same Davey who used to brag about hanging out with the Lightbringer. One reader offered this noteworthy response to Davey's show of outrage:

You've Only Yourself To Blame

Sorry, David, but anyone with common sense and a knowledge of history could see Obama for what he was before the primaries, which is why I supported Hillary...

You destroyed whatever credibility you had by backing Obama the way you did, and now that you've discovered what a complete and total ineffectual fraud he is, you feel betrayed. Well, boo-frickin'-hoo for you.

Naturally, this injection of reality evinced a CDS-addled response from O-heads who still -- even now -- absolutely refuse to admit the simple truth that they were wrong and we were right. The bots have erased the line between obstinacy and surrealism.

Seriously, I'd like to know: Does anyone know of any way to find out Obama Girl's reaction to the President's "disgusting betrayal" on this issue? (And am I the only one who still remembers Obama Girl?)

So what do you think of this blog post that I stitched together rather hastily? I'd give it an A-. If I gave it an A, people might consider me egomaniacal.
posted: 7:53 AM