This piece by John Perry -- formerly on the staff of LBJ and Carter -- appeared in NewsMax, the favorite news organ of buffoons everywhere. Despite that laughable provenance, I take this particular article seriously. Consider it a shot across the bow.

(Update: NewsMax has pulled the article. Here is a pdf copy.)

Perry warns of -- pushes for? -- a military coup against Barack Obama:

There is a remote, although gaining, possibility America’s military will intervene as a last resort to resolve the “Obama problem.” Don’t dismiss it as unrealistic.

America isn’t the Third World. If a military coup does occur here it will be civilized. That it has never happened doesn’t mean it wont. Describing what may be afoot is not to advocate it. So, view the following through military eyes:

# Top military officers can see the Constitution they are sworn to defend being trampled as American institutions and enterprises are nationalized.

# They can see that Americans are increasingly alarmed that this nation, under President Barack Obama, may not even be recognizable as America by the 2012 election, in which he will surely seek continuation in office.

# They can see that the economy — ravaged by deficits, taxes, unemployment, and impending inflation — is financially reliant on foreign lender governments....


And so on. You get the picture. Perry's description seems to apply more to the Dubya administration than to Obama's. Of course, a Bush may do what a Dem may not.

Perry, obviously, is engaging in an ancient tactic: Seeding treason while pretending to be a mere observer of events. His piece clearly segues into advocacy, even though he claims otherwise. Suppose someone were to publish lengthy, explicit directions on how to blow up the Washington Monument, only to end with the piece with the admonition: "This, we must never do." Would even the dullest dullard misunderstand that author's true intention? 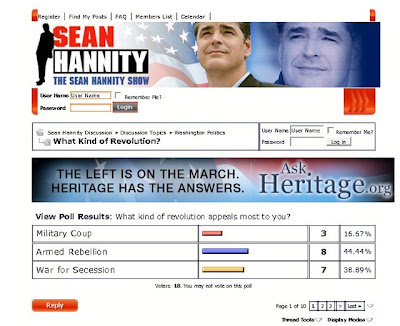 On his website, Sean Hannity's minions have played the same dangerous game. The accompanying graphic speaks for itself.

Hannity himself may not have directly created this poll; apparently, his users did. Whoever set up this poll, and whoever responded to it, can be tracked via IP address.

Last June, the Wall Street Journal demonstrated that it could flout the laws against treason by publishing an explicit call for the dissolution of the United States.

I haven't had much liking for John Aravosis in a long, long time, but I certainly agree with his reaction:

If the Democrats don't step up and shut this kind of talk down right now, I fear we are going to see violence in this country. And yes, it will be the Republicans' fault. But it will also be the fault of the Democratic party for watching the crazy talk grow, and not doing a thing to stand up to it. At some point, silence abets.

As you know, my own feelings toward Obama veer between irritation and repulsion. But those feelings are immaterial. I may dislike him almost as much as I disliked Dubya, but I still understand that he is the elected president. I never have advocated and never will advocate any extralegal method of removing any fairly elected politician from office -- indeed, I find any such suggestion to be beyond toleration. If the Republican party is going to call for armed revolution every time a Democrat takes the White House, then the Republican party may be considered a vehicle for treason.

Whoever knowingly or willfully advocates, abets, advises, or teaches the duty, necessity, desirability, or propriety of overthrowing or destroying the government of the United States or the government of any State, Territory, District or

Possession thereof, or the government of any political subdivision therein, by force or violence, or by the assassination of any officer of any such government; or

Whoever, with intent to cause the overthrow or destruction of any such government, prints, publishes, edits, issues, circulates, sells, distributes, or publicly displays any written or printed matter advocating, advising, or teaching the duty, necessity, desirability, or propriety of overthrowing or destroying any government in the United States by force or violence, or attempts to do so; or

Shall be fined under this title or imprisoned not more than twenty years, or both, and shall be ineligible for employment by the United States or any department or agency thereof, for the five years next following his conviction.


Now here's Section 2387, which may be even more germane to our present discussion:

(a) Whoever, with intent to interfere with, impair, or influence the loyalty, morale, or discipline of the military or naval forces of the United States:

(1) advises, counsels, urges, or in any manner causes or attempts to cause insubordination, disloyalty, mutiny, or refusal of duty by any member of the military or naval forces of the United States; or

(2) distributes or attempts to distribute any written or printed matter which advises, counsels, or urges insubordination, disloyalty, mutiny, or refusal of duty by any member of the military or naval forces of the United States—

Shall be fined under this title or imprisoned not more than ten years, or both, and shall be ineligible for employment by the United States or any department or agency thereof, for the five years next following his conviction.

Whoever incites, sets on foot, assists, or engages in any rebellion or insurrection against the authority of the United States or the laws thereof, or gives aid or comfort thereto, shall be fined under this title or imprisoned not more than ten years, or both; and shall be incapable of holding any office under the United States.

Incidentally, militias are making a comeback, as I predicted they would. Section 2386 applies to them, I believe.

Perry has crossed the line. He has violated sections 2385 and 2387. If Obama's Justice Department does not bring charges, then this president has no balls.

Meanwhile... Arizona congressman Trent Franks -- a birther nutball -- has declared Barack Obama to be "an enemy of humanity." He also said that "Obama's first act as president of any consequence, in the middle of a financial meltdown, was to send taxpayers' money overseas to pay for the killing of unborn children in other countries."

Good lord. Do people actually buy this codswallop?
posted: 6:38 AM