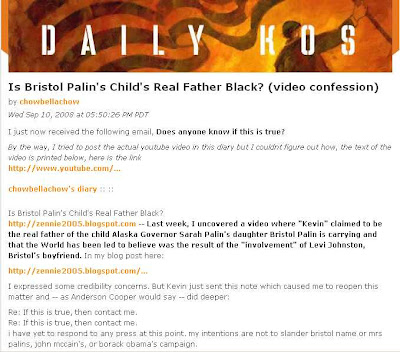 Remember when Dems would decry Republicans who resorted to this kind of crap?

At one time, only Republicans would dare to employ such strategems. Now, the GOP is playing it relatively clean, while the Dems ooze filth from every pore.

The progs said that Sarah's youngest child was actually born to daughter Bristol. The progs also said that the child's disability resulted from Bristol's alleged alcoholism. Now they are saying that Bristol's paramour is black.

In decades to come, objective observers will look at today's pseudo-"progressive" movement with unmitigated disgust.

Since silence equals complicity, I hold ALL Obots responsible for these smear campaigns. I have never seen a major post or editorial by a left-wing writer excoriating these lies. Instead, the Obots dare to accuse McCain of engaging in "swiftboat tactics," even though the Obots themselves have manned the swiftboats since December.

We’ve been flooded for the past few days with queries about dubious Internet postings and mass e-mail messages making claims about McCain’s running mate, Gov. Palin. We find that many are completely false, or misleading.

* Palin did not cut funding for special needs education in Alaska by 62 percent. She didn’t cut it at all. In fact, she increased funding and signed a bill that will triple per-pupil funding over three years for special needs students with high-cost requirements.

* She did not demand that books be banned from the Wasilla library. Some of the books on a widely circulated list were not even in print at the time. The librarian has said Palin asked a "What if?" question, but the librarian continued in her job through most of Palin's first term.

* She was never a member of the Alaskan Independence Party, a group that wants Alaskans to vote on whether they wish to secede from the United States. She’s been registered as a Republican since May 1982.

* Palin never endorsed or supported Pat Buchanan for president. She once wore a Buchanan button as a "courtesy" when he visited Wasilla, but shortly afterward she was appointed to co-chair of the campaign of Steve Forbes in the state.

* Palin has not pushed for teaching creationism in Alaska's schools. She has said that students should be allowed to "debate both sides" of the evolution question, but she also said creationism "doesn't have to be part of the curriculum."


Factcheck later accused the McCain camp of distorting their own work, since a McCain ad implied that Obama himself held responsibility for these smears. In this instance, FactCheck itself has ignored a couple of salient facts: Kos and the other prog sites are completely in the tank for Obama, and Obama has never distanced himself from any lie that they have told. Silence equals complicity. Indeed, Obama has used Daily Kos as a public conduit -- on the COLB controversy, and at other times. Only a fool would deny that Markos Moulitsas is part of the Obama campaign; I predict that we will one day learn that money has exchanged hands.

I remain fully confident that when and if a full email record comes out, we will find that Axelrod and Plouffe orchestrated all of these anti-Palin, anti-female attacks. After all, we now know that the Team Obama was directly responsible for setting up fake websites designed to smear Palin.

Remember when "the good guys" used to castigate Republicans for that kind of dirty pool? Remember?

I left the Left the moment the vile Andrew Sullivan was allowed in. Here, Sully slyly pushes the oft-heard smear that Todd Palin's business partner sealed his divorce records to disguise an affair with Sarah. That lie is exposed here.

Oh -- and you know that sports center that Palin built, the one that supposedly is so extravagant? It didn't throw the city into deficit spending; the ink is still black. Yes, a debt was incurred -- and before you start barking about that, tell me how you paid for your car. (I paid cash, but you probably didn't.) In order to pay the debt early, Wasilla raised the sales tax slightly -- to 2.5%. In Chicago, they're talking about an 11% sales tax in order to pay for all of the corruption, much of which was aided and abetted by Barack Obama.

The progs have called Sarah Palin "anti-Semitic," even though she displays an Israeli flag in her office. (Yes, a "Jews for Jesus" representative did once speak at her church. So what?)

The progs said that she slashed funding for a program designed to help pregnant teens (like her daughter). In fact, Sarah Palin did the opposite -- she raised funding 350%.

Sarah Palin's stance on gay marriage is exactly the same as Barack Obama's. (At least, it's the same as his most recent stance.)

Josh Marshall is still going on about earmarks. For chrissakes, Josh -- Obama and Biden handed out the friggin' earmarks as though they were Christmas candy! Scroll down to our previous post, if you want the details.

I suspect that Canadian pundit Heather Mallick, of CBC News, took a pay-off from the McCain camp. How else can we explain the following rhetoric, which can only have the effect of driving large segments of the electorate away from Obama?

She added nothing to the ticket that the Republicans didn't already have sewn up, the white trash vote, the demographic that sullies America's name inside and outside its borders yet has such a curious appeal for the right.

John Doyle, the cleverest critic in Canada, comes right out and calls Palin an Alaska hillbilly. Damn his eyes, I wish I'd had the wit to come up with it first.

After Doyle and Mallick and their ideological compatriots down south filled the cyber-press with this offensive dreck, the white female demographic shifted massively from Obama to McCain. And still bullheaded people like Mallick refuse to concede that they might have chosen a self-defeating tactic.

Racism, they say. It wasn't anything we said; blame racism. White women shifted to McCain because they're racist. Of course, they weren't racist earlier, when they supported Obama. A virus must have hit earth -- sort of like the one in 28 Days Later, only this virus turned white American women into slobbering bigots.

South Carolina Democratic chairwoman Carol Fowler said that McCain chose a running mate "whose primary qualification seems to be that she hasn’t had an abortion." Even women who disagree profoundly with Palin's politics should feel outraged to hear a sitting governor's resume belittled in this fashion.

Accusing the Obots of sexism isn't swiftboating. It's stating the obvious. Sexism has played a role ever since a bikini-clad Obama Girl slinked onstage in order to coo and purr about how much she wanted to fuck a married man.

Women have written some of the trashiest, most sexist commentary this election season. From Cintra Wilson, at Salon:

Like many people, I thought, "Damn, a hyperconservative, fuckable, Type A, antiabortion, Christian Stepford wife in a 'sexy librarian' costume -- as a vice president? That's a brilliant stroke of horrifyingly cynical pandering to the Christian right.

Actually, a "brilliant stroke" would be for the McCain team to pay Cintra to keep writing this kind of bile. Every time Cintra fires up the word processor, another voter goes Republican. As someone who wants Obama to lose (I don't really want McCain to win, but I certainly want Obama to lose), all I can say is: Salon, please print more articles by Cintra Wilson.

Regarding the Palin/Gibson interview -- in which she did well -- this conservative response sums up the situation:

When has Gibson or ABC News ever peppered the Democrat Presidential candidate, Barack Hussein Obama, with questions nearly as harsh as these? Answer: Never. And they never will. Because Obama could not handle the situation with nearly as much ability as did the GOP Vice Presidential candidate. When has any of the liberal-in-the-tank-for-Obama media ever asked difficult questions of Obama? Same answer. Never. Obama is never questioned by his adoring liberal media about (1) his close and ongoing relationship with unapologetic terrorist, William Ayers, (2) his long time close relationship with the virulent anti-American Reverend Jeremiah Wright, (3) his financial relationship with convicted slum-lord Antoin "Tony" Rezco, (4) his utter lack of executive experience, and (5) his complete lack of foreign policy experience. And finally, why isn't Obama asked to explain why he didn't take the time to visit injured American servicemen in Germany when he could easily have made that arrangment?

Some are criticizing Palin for relying on "prepared" answers. Come off it. Do you think that any candidate is going to walk into a major interview unprepared?

An Obama supporter in Berkeley set up an anti-Palin site called RetardedBaby.com. It was taken down.

Stephanie Miller and other progs said that Palin was being hypocritical when she used her brood as "political props" at the convention after deriding attacks on her children. But didn't Barack Obama do exactly the same thing? According to Miller, if kids appear at a convention, progs have a perfect right to spread slime about those youngsters -- but only if the youngsters belong to a Republican family.

Not long ago, I peeked into Air America for a few minutes. Within that short span, I once again heard people make fun of the elderly as a way of attacking McCain. Great way to sew up the senior vote, folks. You've pissed off the over-60 crowd, the rural voters, Christians and women.

States that Obots once thought they could take -- Missouri, Virginia, West Virginia, North Carolina, South Carolina, Georgia, New Mexico, Florida -- are now going, going, gone. Not long ago, the bots were crowing about their chances in Alaska.

This is the first election that finds me observing Democrats "from the outside." My god. My good god. Have we always been this foolish, this clueless, this self-defeating? Have lefties always gone so far out of their way to alienate huge voting blocs?