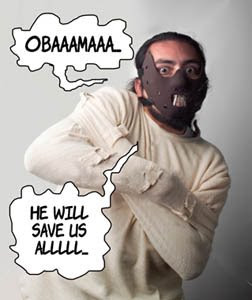 Trying to make a point about how long primary battles have gone on in the past, Hillary Clinton said the following: "My husband did not wrap up the nomination in 1992 until he won the California primary somewhere in the middle of June, right? We all remember Bobby Kennedy was assassinated in June in California. I don't understand it."

I might have said the same thing. Frankly, If RFK had not been killed in June, I would have forgotten that primary races have indeed been known to last that long. But the O-Bots interpreted this remark differently: They say -- get this! -- that Hillary was calling for Obama to be assassinated.

No, I'm not kidding. Moulitsas even published calls for Hillary to be killed.

(Update: I contacted a Secret Service field office and read off the death threat against Hillary published on Daily Kos. The person I spoke to seemed to take the matter seriously, and he has promised an investigation.)

We'll get to that presently. First, savor the psychosis over on DU:

She is not safe to be let loose

This Bitch has really done it now!!

Imagine the uproar that would (properly) result if an Obama opponent ever said: "This coon has really done it now!"

THIS IS WHY SHE CAN'T BE THE VP CHOICE! She's horrid.

maybe she's so incensed about the nomination being "stolen" away that she and Bill are thinking of the unthinkable.

Howard Dean was worried about the Clintons' ties to the Dixie mob going back into the nineties.

Oh yeah. Let's see the Dean quote backing that assertion. What ties to the "Dixie mob"?

Get out the straight-jacket for her - this is outrageous!

While many have thought about this (because of the fear in it, and worry about Obama...)..... for her to mention it, as an opposing candidate..is beyond belief...

She is OFFICIALLY a fucked up human piece of trash.

Oh! My! GOD! This woman is wacko!!!!If you ask me, I think she's trying to "plant" ideas. If anything happens...she's Guilty as hell. I'm saving this link and I will make sure she is charged and brought to justice!

I would prop up a stinking corpse before I turn to her.

Now the only vote I would give Hillary is for her expulsion from the party.

I don't care what her point is, you don't talk about the possible assassination of a presidential candidate as reason to stay in the goddamn race.

Do you Hillary supporters have NO shame? This latest scummy utterance from Hillary Clinton is completely indefensible. Completely.

this latest effort on her part clearly destroyed any shred of decency she had.

She is pulling out every trick she can think of. She has stooped as low as Limbaugh now.

So now she's staying in the race just in case somebody kills the nominee?

How much is the bitch offering for the job?

Guess we know where to look if anyone takes aim at Obama. And there for all those years I dismissed those rumors of Clintons killing to get what they wanted or to stay in power. Guess I was wrong!

this is UNCONSCIONABLE, DESPICABLE, UNFORGIVABLE.

HRC's intention is clear: Some RW gunman, lone or not, *could* make an attempt on Mr. Obama's life

Hillary is appealing to the very people who could carry out such a deed, both domestic and foreign.

SHE IS THE WORST PERSON OF THE CENTURY!!! I hope the Secret Service pays her a little visit.

But when Michelle threatened physical violence against Bill Clinton, that was okay...?

Good Plan, Hillary. You could probably wrangle your way to deliver Obama's eulogy. You'd get at least an hour of free air time. There would be pictures of you hugging Michelle Obama. And best of all, there would plenty of contributions coming your way to pay off your campaign debts as well as your hit man.

And now, let us strike the Messianic note:

Obama is too good. If the some of the forces in our government are as evil and dark as some of us suspect, then he will be a target.

Please do not give this violent pathological woman the benefit of the doubt. Remember "obliterate Iran" and her war vote. She is violent.

She calibrates everthing she says for political gain

This, from some idiot who believes that she wants to kill Obi. Conclusion: She must think that there is political gain to be had in announcing murder plans to the world in advance. Typical Kossack logic, right?

Put it together with the rest of her garbage. She is hoping that will happen now. itis her last hope.

What kind of society condones political opponents talking casualty about their rivals being assasinated?

and a "who will rid me of this turbulent priest" possibility is one strong reason why this shows a terrible lack of judgment.

I never wondered that she did not have this in the back of her mind...She is that low and that blindingly ambitious...We have been talking about what she meant by 'something might happen'! for a long time!!!! True colors will out!

She wants to be president, if she believes he needs to die for her to be nominated, then I believe she wants him to die. She is a monster and should never be trusted with any decisions regarding the future of this country.

Of course she's saying she wants him dead.

Turns out Sullivan was right--they are sociopaths.

Her words are unconscionable. She no longer deserves the title Democrat. I'm done with her.

The media has given this awful woman an easy time for too long. She is just awful, and it has reached the point of outrageousness. When will they admit that there is something seriously wrong with this woman?

Well, she is, after all "Our Nixon". The American id come to life.

Hillary -- the Id? She was considered Ms. Overly-Calculated not many months ago.

I'VE HAD IT WITH HER DOG WHISTLE RACISM... SHE IS BEHAVING IN A MANNER THAT SUGGESTS THAT SHE IS NOT STABLE.

How amusing: A Kossack calling someone else unstable! Let us continue with this bizarre "dog whistle" theme:

Just like she dog whistled to all her racist friends in WV and KY she's calling for his assassination!!!

SOMEBODY PLEASE STOP HER FROM DOING THIS!!!

I swear to god I will leave this country and damn it to hell if anything happens to him!!!!

It seems like she is possibly using the "dog whistle" technique that could encourage some crazy person out there to act on her comments.

I think it's another seed she's planting

Hillary, though, is always calculating about everything she says. This is no different.

The "calculation" note is struck again. Odd, isn't it? These people refer to the statement as a major gaffe -- and yet they also think it is calculated.

She couldn't pick another candidate out of all the presidential races who was still in it in June? She had to pick one who was assassinated?

Actually, yes. 1968 was the last time (if I recall correctly) a "come from behind" candidate could have raced out in front in the final stretch. RFK did not have front-runner status going into June, but he probably would have had it by month's end. RFK would have won the nomination late in the game, if not for the assassination. I don't know how you can mention this history without making any reference to his death.

In other words, in terms of Democratic primary history, she was comparing her chances to RFK's chances at a similar point in his campaign. The full video makes this clear. Rosy thinking, perhaps -- but she was hardly saying "Kill Obama!"

I've had it...FUCK YOU HILLARY

"Bitch" is too kind a word to describe this megalomaniac. 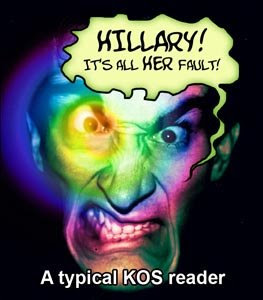 You have to read the following comment in context to understand that this is a Kossack calling for Hillary to be killed. Moulitsas does not delete the comment or alert the Secret Service.

And a Drive-By Won't Be Out of the Question. What goes around, comes around. The stupid fucking bitch !!

Talk About WHITE TRASH that bitch better keep looking over her shoulder.

The Vince Foster Issue Should Be Investigated Again. Clintons just showed that their ambitions know no limit.

Does she have a hit on him?

She knew the ramifications before she made the statement. She is playing percentage politics.

Again: This is from someone who thinks she called for assassination. Apparently, there is a "percentage" in making such a statement in public. Kossack logic.

I know she is capable of some real slimy subliminal messages.

So Hillarys "Nuclear Option" Is An Assasination

She is giving permission to nutcases to lock-n-load and to aim-n-fire, to 'help' her.

Looks to me like all the nutcases are on Obi's side.

This strategy worked quite well in ancient Rome. I think the preferred method of knocking off rivals to the throne was by poison. Maybe Obama needs a taster.

Kay has a list of dead peoples somehow related to Clintons.

She IS a Republican

Breaking* Hillary vows to continue race until all the bullets are counted.

You know that racists and nutty supporters are out there listening to you. You know the effect this is having on them. Your behavior, Sen. Clinton is subhuman. In fact even animals will be ashamed of you if I were to compare you to them.

A Kossack accusing someone else of being subhuman. Now that is funny.

On another subject, we have this from DU:

They're both, at heart, southern racists who know how to play WEDGE politics.

I know it hurts ... yes, it hurts BAD to realize that "the Clintons" are shameless race baiters and do not deserve our respect.