to influence the public discourse and sway Hillary voters to "remember we are all Democrats", to give up Clinton's cause, and to become dutiful citizens of the Obama Nation.

Also, it's been noted by several HillBuzz readers, that Obama volunteers are being told to ratchet down the anti-Hillary hate, because someone in the campaign realizes Hillary Clinton supporters are not very likely to support Obama if he becomes the nominee. 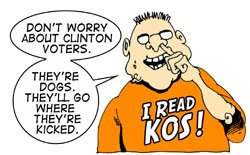 Which means, of course, that Obama controlled the Hillary-hate in the first place. His was the hand on the spigot. He is the one we must blame for the ceaseless smears and calumnies.

Mine is a pro-Hillary site only by default. She was hardly my first choice. At one time I favored Obi, until his campaign played the race card and the progressive blogs became intolerable.

Since then, I've received a truly bizarre barrage of anonymous hate comments, and not from my usual opponents. This hate-mail has had no hint of the conciliatory.

These "drive by" comments appear every hour. They never make a detailed argument, and they never make much sense. Judging from the writing style, only two or three individuals are involved. Some of these messages make threats. I've learned to delete these comments (mostly) unread; a whiff is enough to know what the rest is like.

The sheer ceaselessness of the barrage surprises me. I can't help suspecting that money has changed hands.

Paid or unpaid, Obama's followers have displayed a shameless, brainless, cult-like fanaticism that many find revolting. Yesterday, we discussed PA radio personality Steve Corbett. He is spearheading something called Operation Turn Down:

Looks like Steve Corbett PA Radio host at wilk network has caught the attention of The DNC, yesterday Corbett launch Operation Turn Down campaign to let the DNC know that true Democrats where not voting for Obama. The phones lines lit up; calls came from state after state, blogger from a site called Confluence and others posted Corbett Operation Turn Down and the blog sphere was at a buzz. State after state voters calling and pledging they would under no circumstance vote for Obama this has to be the DNC nightmare. Operation Turn down continues Friday at 3 p.m. EST tune in folks this is going to be huge.
http://wilknetwork.com

PS Please Let Everyone Know to listen in, on the net or radio, call in we got the DNC ears let our voice be heard

For those of you who want to know more about Corbett, go here:

I’m part of an impromptu movement born of outrage and frustration to which Democratic Party leaders need to pay very close attention. I’m a radical Democrat and proud of it.

Radical politics is one reason why I majored in “Community Development” at Penn State in 1970, after showing up there in September of 1969 with an open mind and a head loaded with ideas – not all of them good.

By November I was on the street in DuPont Circle in Washington, D.C., getting tear-gassed by National Guard troops during an anti-war protest. The next day I watched the attack on the Justice Department. The next year I watched my state cop father show up on my campus in riot gear.

I spent the next 30-some years developing my perspective and my honor as a daily newspaper columnist and broadcast commentator on television and radio.

I’ve learned from it all. I’m still learning.

And all these years later I still value my community development education and my degree from the counterculture school of hard knocks. The lessons of Kent State, My Lai, and the mean streets of Chicago under the first Mayor Richard Daley remain a part of my pledge of allegiance to real change I can believe in.


Hillary is the strongest, best candidate. Hillary can beat John McCain. Hillary is my Democrat.

Corbett and I are not really on the same page -- he supported Nader in 2000, and he seems much rather more enthused about Hillary than I am. But he shares my aversion to political cults, and I think he understands that what passes for "progressive" politics today is a disguised form of Libertarianism, which has nothing to do with the left that he and I once knew.

If Obama were truly of the left, he wouldn't hire Libertarians like Goolsbee or Liebman to fix our economic ills, and he would not have Libertarians like Markos Moulitsas and Arianna Huffington in his corner. Obama's politics of unity means unity with Republicans, not with the core of the Democratic party, who have been treated like sewage.

Which brings us to these words from HillBuzz:

HillBuzz wonders if the year of brutal attacks on Clinton and her supporters could ever be forgotten by the 17 million people who have so far cast their votes for Hillary Clinton. These attacks were made, deliberately, not just by Tim Russert and Chris Matthews and the ilk of Olbermann: they were made on a daily, energetic basis, by the legion of Obama supporters online, encouraged by the Obama campaign.

We can't speak for everyone, but we can speak for ourselves: as lifelong Democrats who always considered ourselves dyed-in-the-wool true party loyalists, we have to be honest and admit the way Hillary Clinton and her supporters have been treated in this primary race, by Obama, the DNC, and Obama's supporters has caused us to question our party affiliation.

You think I'm going support Obama after receiving insults and threats? Like hell.
posted: 11:26 AM