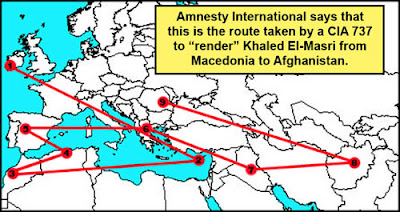 I admit it: I am indulging in speculation when I suggest that CIA rendition flights have been used to transport non-human contraband. But is such speculation groundless?

Let's look at just one journey:

What this means in practice is that large parts of a flight’s itinerary may not be shown by FAA flight records. In January 2004, for instance, the CIA’s Boeing 737, N313P, left from Washington DC and stopped off in Ireland, Cyprus, Morocco, Algeria, Spain, Macedonia, Iraq, Afghanistan, Romania and Spain before returning to Washington DC, apparently carrying out the rendition of Khaled el-Masri on the way. FAA records show the Washington to Ireland and Ireland to Cyprus flights, but do not record the landings in Morocco, Algeria, Spain, Macedonia, Iraq, Afghanistan or Romania. Amnesty International has obtained this information from another source.

(Emphasis added.) Amnesty gives these details in order to describe the difficulties faced by anyone trying to trace an aircraft's route. What I find remarkable is that we have only one transported prisoner linked to this epic journey.

El-Masri was captured in Macedonia and "rendered" to Afghanistan. So why did the plane hop on over to Romania?

While I'm no expert on the range of a 737, I suspect that the craft can make the trip from Ireland to Macedonia without stopping in Spain, Algeria and Morocco. Obviously, this aircraft transported other people or things.

Turns out I was not the first person to speculate along these lines. A Portugal-based writer nicknamed Brenda Stardom offered her thoughts on the subject back in 2005. First, she quotes this passage from a site devoted to CIA plane-spotting:

The Frequency Monitoring Centre in the Netherlands is now reporting on yet another CIA prisoner aircraft transiting Schipol East Airport in Amsterdam. The plane departed Schipol on November 18, 2005 enroute to Reykjavik, Iceland. The plane, a DeHavilland Dash 8-315B (registration N505LL) flew to Amsterdam from Sabiha Gökçen Airport in Istanbul, Turkey on November 16, 2005. The plane is registered to Path Corporation, a CIA front company.

Turkey? Afghanistan? Whoa. Where do the drugs come from? Where are they consumed? What is Amsterdam known for?

Let me repeat a point made in earlier posts: These aircraft can stop at military bases and unload cargo without anyone in the host country being the wiser.

We should also emphasize that -- as the Amnesty report makes clear -- the CIA is not the only entity involved with these flights.

It has been reported that the teams that actually carry out the rendition operations include members of military Special Forces units, as well as CIA personnel. Amnesty International has copies of police investigation reports into CIA flights in Spain that suggest that the pilots of the rendition planes were US military officers...

According to a former CIA officer interviewed by the Chicago Tribune, Gulfstream N379P/ N8068V/ N44982 was operated by "the Joint Special Operations Command, an inter-agency unit that organizes counter-terrorist operations in conjunction with the CIA and military special forces."(58) The Joint Special Operations Command is the coordinating agency for all military special operations forces and operations, and its headquarters are at Fort Bragg, North Carolina.

In the Vietnam era, a Saigon-based heroin exporter named Leslie Keith Atkinson shipped smack to Fort Bragg, North Carolina, in the bodies of fallen American soldiers. Back then, "word" had it that the Special Forces were in charge of the operation. (See Time Magazine, January 1, 1973.)
posted: 9:16 AM