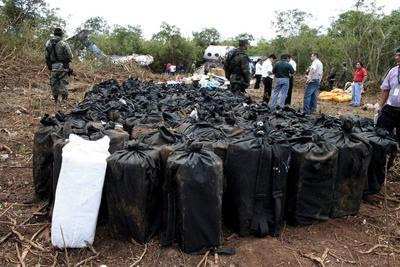 Long-time readers will recall last year's enigma of the spooked-up Skyway jet, found on a Mexican tarmac with five tons of cocaine aboard. Now we have the sequel: A Gulfstream II jet, loaded with a similar amount of cocaine (accounts vary, but four tons is the most commonly-cited figure) crashed in the Mexican jungle near Cancun on September 26.

According to McClatchy reporters Jay Root and Kevin G. Hall, the coke belonged to the notorious -- and, in some quarters, celebrated -- drug kingpin Joaquin "El Chapo" Guzman, who has a Robin Hood-eque reputation of helping the poor. The flight was delivering drugs from Colombia to El Chapo's headquarters in Mexico.

A number of oddities commend this incident to our respectful attention, not least among them the plane's history: The European press has reported that this same Gulfstream II, tail number N987SA, took part in the CIA's controversial "rendition" program, which transported prisoners to torture-friendly lands.

This background makes the "Who owned the plane?" of rather more interest than "Who owned the coke?" We will return to the issue of ownership shortly. First, another mystery:

Why did the jet go down?

News reports from Mexico universally declare that the aircraft was spotted flying in a wide, circular pattern over the Mexican town of Tixkokob, not far from Cancun. Onlookers called the Mexican police and army. Helicopters followed the jet for over two hours until it crashed in a forested location outside the city.

No fire attended the crash, indicating that the craft had simply run out of fuel.

No bodies were found.

The obvious inference: The pilot and passengers parachuted out of the airplane. But why?

Most accounts hold that the army helicopters did not begin a pursuit until the Gulfstream was observed lingering over Tixkokob. One tenuous and unconfirmed German-language article suggests that the craft had been pursued from the moment it entered Mexican airspace. To the best of my knowledge, there are no published eyewitness reports of a pursuit craft before the army choppers were called in.

Maddeningly inconsistent reports hold that Meixican police later arrested the pilot and one or two other crew members, who were discovered some distance from the crash site. The Chinese news agency Xinhua describes the pilot as a 35 year old Colombian. According to another account, he has tried to bribe his way out of detention.

Who owned the jet?

Close followers of the 2006 Skyway tale will recall that, in the weeks before the fatal flight, the jet underwent a series of rapid ownership transfers -- even though it still carried the Skyway logo. The final "owner" was an untraceable party in Simi Valley, California.

A similar pattern obtains in the present case. The aircraft was sold at the end of August to Donna Blue aviation, located in Florida. The firm appears to be an on-paper front company for a pair of Brazilian investors, Joao Luiz Malago and Eduardo Dias Guimaraes.

A Google search on Malago indicates that he is a lawyer in Brazil who played a role in a 2006 court case in Venezeula. That case involved a Brazilian aircraft that had flown from Bogota, Colombia to Caracas, Venezuela.

Malago has told McClatchy reporters Root and Hall that he did not own the Gulfstream II with the N987SA tail number at the time of the crash. The Brazilians claim that they quickly "flipped" the airplane, selling it for $2 million to a Florida pilot named Clyde O'Connor. The drug flight began within 24 hours of this sale.

Little is known about O'Connor beyond these facts:

-- He was not licensed to pilot a Gulfstream II.
-- He filed for bankruptcy in 1998.
-- He was found guilty of a safety violation in 2001.
-- He ran a charter airline company called Execstar Aviation in Fort Lauderdale.

Execstar's suspiciously skimpy web page is here. The company's listed address is 5535 Northwest 23rd Avenue # 16; the phone number is (954)776-1633. At present, nobody at the company is answering the telephone. The web page lists the company's fleet: "...a Hawker, King Airs, Baron 58's, Cessna 402 for passenger service and a Cessna 207 for cargo services." No mention of the recently-purchased Gulfstream II.

This 2002 article refers to Execstar as a $4 million, 22 employee operation which benefited from the post 9/11 delays at airports. For a man who had suffered a recent bankruptcy, O'Connor apparently had surprising access to funds.

Who owned the jet at the time of the alleged rendition flights?

Here, the trail gets murky.

Before the sale to Malago, the jet was leased to (some accounts say owned by) Air Rutter International, a charter airline service operating out of Long Beach, California and Farmingale, New York. Their present fleet includes four Gulfstreams and two Bombadier Challengers.

I have seen no indications that this company, run by a man named William Cripe, is anything other than a reputable and honest charter airline service. Cripe insists that the jet did not make any trips to Guantanamo or other "rendition" sites during the time when his firm used the craft. As noted earlier, those flights are said to have occurred during the 2003-2005 period; Cripe seems to have leased the jet after this time.

The man he leased it from -- the actual owner of the jet -- is a rather interesting figure: New York landowner, developer and race horse enthusiast William Achenbaum.

Achenbaum and his son Michael are best-known as the owners of the Gansevoort Hotel in New York City. They were the key figures in a heated (and rather amusing) local controversy over a billboard which critics considered an eyesore. In 2004, Achenbaum ran into difficulties when he attempted to purchase another hotel in Miami for $54 million.

A quick Google search has uncovered no allegation of illegal activity involving Achembaum -- except for this story, which claims that a broker for Achenbaum tried to bribe a city official back in 1976.

According to this German-language article (the reliability of which I cannot yet determine), the actual operator of the craft during the 2003-05 time frame was Richmor Aviation "which offers airplanes for subletting, some of which were used for the conspiratorial operations of the CIA." The Richmor home page is here; they also have a flight school.

Richmor, based in Schenectady County, has indeed been identified in a number of stories tracking the rendition flights. See, for example, the web page here and the SourceWatch profile here.

At least one plane supplied by Richmor has become known as a possible transport of suspects in CIA extraordinary rendition operations. The Gulfstream jet in question is owned by Assembly Point Aviation, an Albany, New York company owned by Phillip H. Morse, a part owner of the Boston Red Socks and a successful catheter salesman.

The plane in question sported two different license tags, one was N85VM, and the other was N227SV. These two tags correspond to the Gulfstream with the serial number 1172.

This plane has made over 50 trips to Guantanamo with trips throughout the Middle East, Europe, as well as domestic flights in the US for Red Sox events.


Note the pattern: A New York businessman buys a Gulfstream which is operated by Richmor, which uses the jet for "spooky" activity.

In the 1990s, the Richmor name came up during the investigation of the Bojinka terror plot, which had targeted the Pentagon and CIA headquarters.

Plotter Abdul Hakim Murad told investigators that he had received flight training in the United States -- as had ten co-conspirators, who came from Sudan, United Arab Emirates, Saudi Arabia, and Pakistan. Murad, Ramzi Yousef, and Khaled Sheik Muhammed shared an apartment in the Philippines, where police found a Richmor business card. Investigators later determined that Murad and other Bojinka conspirators had studied at Richmor.

The coincidence is striking: A terrorist who hoped to destroy CIA headquarters picked a flight school later associated with CIA covert activities.

So far, I have seen no hard evidence that Achenbaum had any knowledge of the rendition flights. Indeed, at this time, only one foreign-language source links the jet to Richmor. Moreover, I know of no evidence that any previous owner of the jet was aware of the recent drug flight.

One must simply take note of two facts:

1. Acording to various published reports, the jet has a history linked to American intelligence.

2. According to a small library of books about the covert world, American intelligence has a history linked to the drug trade.

Final note: In 2005, a Clyde O'Connor living in Tamarac, Florida (a suburb near Fort Lauderdale) wrote a letter to the editor which calls America a "police state." He applauds the death of a local cop and expresses an intense dislike for the police. If O'Connor is lucky, the authorities who may now be interrogating him have never read this letter.
posted: 1:44 AM