(I've added much to this account, and have taken the research into areas visited by few other bloggers. Yes, it's a big, long, weird story -- but I beg you to stay with it.)

An FBI informant was involved with the JFK airport terror plotters:

The plan was foiled with the help of an informant who recorded conversations with the suspects as recently as last month.

But so far, we have no reason to believe that the informant encouraged criminality, as has occurred in previous instances.

An initial report on CNN fleetingly suggested that the plot actually concerned drugs in some way. Certain factors make the idea intriguing -- after all, the story involves airport personnel who have strange connections to the Caribbean. Stranger still, two of the four accused, Russell Defreitas and Abdul Kadir, come from the South American nation of Guyana.

Accused plotter Abdul Kadir, a former member of parliament in Guyana (!), was on his way to an Islamic religious conference in Iran. His daughter denies that he has any association with either the other accused conspirators or with any anti-American activity. However:

Kadir's wife, Isha, said that her husband was nabbed while boarding a flight to Venezuela, where he planned to pick up a travel visa to attend an Islamic religious conference in Iran. He had flown from Guyana to Trinidad on Thursday.

That sort of travel has a cost. This guy is getting money from somewhere. According to the Australian,

Authorities said Kadir and Nur were associates of Jamaat Al Muslimeen, a Muslim group behind a 1990 coup attempt in Trinidad.

This Sunni group, led by former police officer Yasin Abu Bakr, is a nasty bit of business with a long and continuing history of rape, kidnapping and murder. So far, I've seen no evidence that Jamaat Al Muslimeen is related to Al Qaeda. Keep in mind, as you read the following, that Trinidad/Tobago has an ethnically diverse population, and that less than ten percent of the citizens of that island nation is Muslim.

A court ruling, questioned by many as patently absurd on the facts, upheld an amnesty agreement obtained during the incarceration of parliament by the group. This led to the non-prosecution of its members for this crime despite the contention that the fact that guns and force were used to obtain said amnesty constituted duress.

In many respects, the Jammat al-Muslimeen’s ideology and rhetoric mirror that of militant Black ethno-nationalist movements, including the most radical fringes of the Nation of Islam. Abu Bakr’s supporters see him as a hero fighting for social justice. Interestingly, although most Trinidadians did not support his 1990 coup attempt, many at the time agreed with the issues raised by the Jammat during the crisis, especially impoverished Afro-Trinidadians. At the same time, the Jammat is seen by many locally as a well organized criminal empire involved in everything from drug smuggling, money laundering, kidnapping for ransom, and extortion, with Abu Bakr running the show.

Right now, I suspect this matter goes beyond any simplistic scenarios of Bushco attempting to gin up a terror threat in order to bolster his poll numbers.

I think these guys were involved with smuggling.

I think CNN's early whispered suggestion of "drugs" was right on the money. Indeed, we can hardly come to any other conclusion -- after all, we're talking about airport security personnel allying themselves to a criminal group in control of a nation's illicit activities.

If my suspicions are correct, the FBI didn't need a terror tale to shut down this operation. And that's intriguing.

Update: One of our commenters made a point which should have occurred to yours truly. If Kadir belongs to a Sunni sect, why is he attending a religious meeting in Iran, a Shi'ite country?

And why go to Iran through Venezuela?

(Second update: A reader says that Kadir was Shi'ite and that Venezuela has the only direct flight to Iran; see the fourth comment, below.)

We are told that this plot has been in the working for two years, but Kadir was a member of the Guyanese parliament as recently as last year.

This blogger and I are not sympatico politically (although I too am a fan of good ol' Andy Jackson), but he has done some good digging. He introduces us to a key Jammat al-Muslimeen lieutenant named David Millard, who goes by the nomme de guerre of -- I'm not making this up -- Buffy.

Buffy was not directly involved with the coup -- he was in New York at the time -- but he was fingered for several mafia-like murders in his home country. And just like the guys involved with the JFK airport plot, Buffy tends to hop between Trinidad and Guyana.

How does he hook up with the JFK thing? Well, a year ago, Buffy was nabbed by the Guyanese Defense Forces:

The Guyana Defence Force (GDF) Thursday [ 4 May] night announced that the man held in the raid in the continuing search for 30 AK-47 rifles and five pistols stolen from its Georgetown headquarters, had identified himself as Mustafa Abdullah Muhammad, also known as Edmund DeFreitas.

He has, however, now been identified as David Millard, well-known in Trinidad as 'Buffy', who fled from New York after a shooting incident and returned to Trinidad where he moved up the ranks of the radical Jamaat Al Muslimeen group led by coup leader Abu Yasin Bakr.

A top source yesterday said authorities are trying to find out how Millard found his way here and acquired a Guyana passport in the name of Edmund DeFreitas, recorded in the travel document as born in March 1960 at Bartica in Guyana.


(Emphasis added.) He had used the name DeFreitas for years; the name even appeared on his driver's license. Here's the interesting part: One of the JFK terror suspects goes by the name of Russell DeFreitas.

A mere coincidence of nomenclature? My "Spidey sense" indicates otherwise.

So, what happened to Buffy after the Guyanese scooped him up? He was investigated on arms charges -- something to do with a whole bunch of missing AK-47s. According to one report, crack cocaine was found at his residence, and he bragged about working as a "bodyguard" for the local drug kingpin. The Guyanese brought the United States FBI into the investigation:

The FBI assisted the GDF in conducting several polygraph examinations and interviews and the investigation produced additional leads that are being analysed by the FBI, the Joint Services and other organisations here and in the U.S., the release said.

(Emphasis added.) Then the Guyanese sent him to Trinidad to face those pesky murder charges. He stayed in jail for a few months... 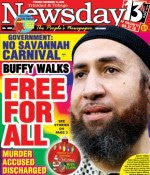 So, what do we know?

1. Buffy had connections to still-mysterious organizations in the United States.

2. He spent time in New York, home of the most recent terror plot.

3. He used fake ID with the name "DeFreitas," the same last name as the leader of the alleged terror plot.

4. Both Russell and Buffy have links to Trinidad and Guyana.

5. Buffy has links to drug smuggling. For reasons given above, I believe (but cannot yet prove) that the JFK "terror ring" was originally a smuggling operation.

6. In the criminal complaint, the informant quotes Russell DeFreitas as saying that the "brothers" from Trinidad and Guyana will assist in the terror plot. I feel fairly safe in taking this as a reference to

Did Russell DeFreitas know Buffy? Did the latter inspire the former's pseudonym?

Frankly, the two look like they could be related, if the sketch is anything to go by. Russell DeFreitas is 63, while Buffy's "DeFreitas" ID lists a 1960 birthday.

When he was arrested Millard told Guyanese investigators that he was an American citizen and had served in the US Army.

The Saturday Express was told that Millard did in fact serve in the US Army but was deported from that country and is a Trinidadian citizen.

Deported when? Served when?

In Guyana, Millard claimed to be a bodyguard to a local drug kingpin, which arguably buttresses my surmise that this terror cell was involved with smuggling. The criminal complaint here offers some further clues, especially when you compare the information about Russell DeFreitas' Guyana trip to the information given above about Buffy's antics in that country.

Also worth noting: The FBI informant (known only as the Source in the complaint) was -- you guessed it -- a convicted drug smuggler. This background, it seems, is what endeared him to DeFreitas.

If you put it all together, you may agree that my major hypothesis -- these guys were all about drugs -- is, if not proven, quite likely.

I realize that many visitors to this site want to see a simple scenario: Bushco created a fake terror threat to buttress the President's sorry poll numbers. I think that just such a scenario has played out in the past -- but this ain't that.

Neither do I think that anything here redounds to Bush's credit.

One thing I'd like to know is just when the 63 year-old Russell DeFreitas retired from his job. It would be terribly embarrassing if the administration allowed a man with connections to Jamaat Al Muslimeen to work as a baggage handler after September 11, 2001.