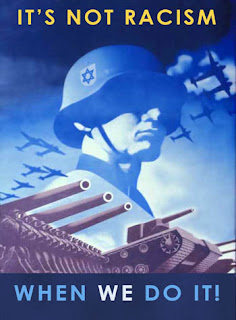 Another entry in our series on Israeli racism. This enterprise began when Israeli apologists (on the megaphone network, it seems) scried a non-existent "anti-Semitism" into utterly innocent words and phrases published on this blog, simply because I had dared to bring up the "movers and art students" story.

Racism, eh? Well, a noted Jewish after-dinner speaker once said that you can't go around telling folks to remove the splinters from their eye sockets when you've got enough lumber to build a replica of Abraham Lincoln's birthplace blocking your own vision. (I translate loosely.)

A critic asks me why I don't go to Israel and check things out for myself. I would like to do so, but funds do not permit. However, Shulamit Aloni is the the former Education Minister of Israel, so I presume that she knows the territory quite well. Here's what she has to say in a piece titled "This Road is for Jews Only: Yes, There is Apartheid in Israel":

The US Jewish Establishment's onslaught on former President Jimmy Carter is based on him daring to tell the truth which is known to all: through its army, the government of Israel practises a brutal form of Apartheid in the territory it occupies. Its army has turned every Palestinian village and town into a fenced-in, or blocked-in, detention camp.

On one occasion I witnessed such an encounter between a driver and a soldier who was taking down the details before confiscating the vehicle and sending its owner away. "Why?" I asked the soldier. "It's an order--this is a Jews-only road", he replied. I inquired as to where was the sign indicating this fact and instructing [other] drivers not to use it. His answer was nothing short of amazing. "It is his responsibility to know it, and besides, what do you want us to do, put up a sign here and let some antisemitic reporter or journalist take a photo so he that can show the world that Apartheid exists here?"

Did man of peace President Carter truly err in concluding that Israel is creating Apartheid? Did he exaggerate? Don't the US Jewish community leaders recognise the International Convention on the Elimination of all Forms of Racial Discrimination of 7 March 1966, to which Israel is a signatory? Are the US Jews who launched the loud and abusive campaign against Carter for supposedly maligning Israel's character and its democratic and humanist nature unfamiliar with the International Convention on the Suppression and Punishment of the Crime of Apartheid of 30 November 1973? Apartheid is defined therein as an international crime that among other things includes using different legal instruments to rule over different racial groups, thus depriving people of their human rights. Isn't freedom of travel one of these rights?

In the past, the US Jewish community leaders were quite familiar with the meaning of those conventions. For some reason, however, they are convinced that Israel is allowed to contravene them. It's OK to kill civilians, women and children, old people and parents with their children, deliberately or otherwise without accepting any responsibility. It's permissible to rob people of their lands, destroy their crops, and cage them up like animals in the zoo. From now on, Israelis and International humanitarian organisations' volunteers are prohibited from assisting a woman in labour by taking her to the hospital. [Israeli human rights group] Yesh Din volunteers cannot take a robbed and beaten-up Palestinian to the police station to lodge a complaint. (Police stations are located at the heart of the settlements.) Is there anyone who believes that this is not Apartheid?

There's much more; follow the link. Anyone who wants to reproduce the art may do so; click on the image for a larger version.

(Hey, megaphoners: I'm keeping to my once-a-day schedule. I did not post such pieces before you decided to attack me. In fact, I had hoped to shut down this blog. Can you define the term "self-defeating strategy"...?)
posted: 10:33 PM