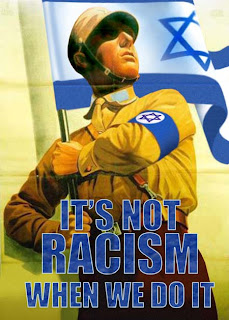 So, what do you think of my little contribution to the art of the political poster?

This is my variant of a popular anti-GOP piece -- and I will be quite amused to hear someone argue that such a tactic is permissible against the American government but never, ever against the Israeli government. (If you have such an argument welling up within you, by all means offer it. Strained rationalization is one of my favorite forms of humor.)

I like to think that my version is a bit more professional than the anti-W effort, on a purely technical level. The original Nazi work, incidentally, was not a political poster per se but an advertisement for a film called S.A. Mann Brand.

While ferreting out the original , I discovered what must be the all-time most hilarious bit of fascist propaganda imagery, reprinted below and to the right. Kinda looks like Heinrich is congratulating Fritz for winning the dress-your-doggy contest on Project Runway, doesn't it? 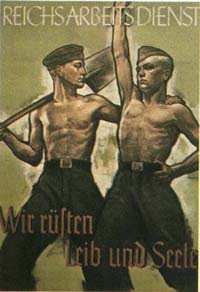 Admittedly, that sidelight has no direct bearing on our present subject, but I just had to share it.

Our present subject is racism. This blog was accused of it by Israeli apologists (or rather, by "megaphonies") because the doctor and I dared to use the phrases "our Jewish brethren" and "of Jewish extraction." Speaking as someone who is of Italian extraction, I can tell you that no-one in my family would have considered taking offense at that phrase. And to be called a brother hardly qualifies as racism.

("But," someone out there may want to say, "it's different with the Jews than with the Italians!" Different how? Please, hit me with any strained rationalizations that might occur to you. I need the laffs.)

For real racism, the institutionalized kind, the kind backed by power, go to Israel. Here's a snippet from an earlier posting, which I beg my critics to double-check:

As I've noted before, former Mossad officer Victor Ostrovsky's book By way of Deception reveals that Palestinian captives were subjected to human experimentation at Israel's Nes Ziyyona facility, which is devoted to studying chemical, bacteriological and radiological warfare. In the 1950s, the Israelis conducted massive radiological experiments on Sephardic Jews. In the year 2000, an Israeli medical journal published an article bearing the ominous title "Human experimentation in the Israel Defence Forces--between the hammer of necessity and the anvil of ethics"; it remains untranslated.

Experimentation on unwilling human subjects, chosen because they did not conform to the Azhkenazi model. Can't get much more racist than that, can you?