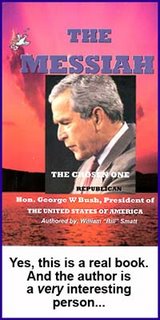 I probably shouldn't mention this matter at this time, given the continuing horrors in Lebanon. Frankly, I haven't yet developed my thoughts; what follows is too vague and ill-formed to qualify as a hypothesis, or even as a coherent narrative. That said...

Have you noticed the oddities surrounding certain "Lebanese businessmen"? I am beginning to wonder if an underground Lebanese "mafia" plays an unrecognised role in current affairs...

An earlier post discussed the Lebanese-born Richard Rainwater, a billionaire financier who profits from calamity. Perhaps the greatest calamity he helped to inflict on the world is the presidency of his good friend and financial partner, George W. Bush. Daniel Hopsicker has linked a Rainwater enterprise with the "drug jet" owned by the scam company Skyway.

I asked Hopsicker why a man like Rainwater -- who has made a frightening amount of money from oil, real estate, and cell phone technology -- would take the risk of witting involvement in the drug trade. Hopsicker considered my question naive, as perhaps it was.

The drug jet was discovered on the tarmac of a Mexican airport, under circumstances which still seem mysterious. Someone alerted the Mexican authorities -- which have been known to look the other way, if paid to do so, in other drug smuggling cases. Those same authorities allowed the pilot of the DC-9 to get away, even though the cops had the aircraft surrounded. Naive I may be, but even I don't think that sort of thing happens by accident.

Let us mull over those seemingly-unrelated concepts: Strange doings in Mexico...strange Lebanese businessmen... Do a little googling. What do we come up with?

We soon come face-to-face (and quite a forbidding face it is) with Jean Succar Kuri, a Cancun-based Lebanese businessman who now resides in an Arizona jail. Kuri has been named as the proprietor of a child prostitution ring which supplied sexual playthings -- slaves, essentially -- to the elite. The story is told here; Rigorous Intuition has devoted some fine posts to this vile business.

Courageous journalist Lydia Cacho wrote a book on this scandal: The Demons of Eden. The Mexican authorities have severely harassed her and put her in fear of her life. Cacho, arrested on trumped-up charges, now stands accused of libel -- in a country where truth is not considered an absolute defense.

A clandestine telephone recording indicates that Cacho's harassment was arranged, in large part, by another Lebanese businessman in Mexico: Kamel Nacif, who travels in the highest circles of the Mexican government. Nacif, a wealthy and (by all accounts) exploitative and despotic maquiladora owner, seems to have had close ties to Jean Succar Kuri:

In the conversations, the voices identified as those of Nacif and [Puebla governor Mario] Marín discuss how they had the activist arrested and thrown into a cell with "nutcases and dykes (lesbians)," so that she would be raped. That did not happen, however, because in the prison in Puebla, "the prisoners themselves and the guards protected me," said the writer. But she was mistreated. Cacho described how she was threatened during the nearly 20-hour trip to Puebla and was only allowed to eat once.

Mexican textile magnate Kamel Nacif has been a familiar face at Las Vegas gambling tables for some 30 years, using phony identification to wager at Caesars Palace when he was still in his late teens. He remains, however, a bit of a multimillionaire mystery man, long suspected by Nevada Gaming Control Board agents of money laundering and arms and narcotics dealing.

There's more. The Bushes have been tied to yet another shadowy Lebanese clan.

Back in 1982, the Smatt clan -- a wealthy Lebanese family operating in Florida and Jamaica -- became the target of an investigation ("Operation Nimbus") by FBI agent Darlene Novinger, who claimed that evidence linked the clan with drug smuggling. Novinger (who died of cancer in 2003) also believed that "Poppy" Bush and Jeb Bush were involved.

After submitting her report, orders came to cease the investigation and destroy all documents. She said someone in the FBI's Miami office leaked to the traffickers that she had penetrated the operation. Before Operation Nimbus was shut down, veteran US Customs investigator Joe Price filed corroborating reports in September 1983 implicating Bush. And after he did, FBI agents arrested him on a narcotics trafficking charge.

The Smatts, led by paterfamilias William Smatt, were linked to the quasi-fascist Lebanese Phalange -- more properly called the Kataeb Social Democratic Party -- founded by the Gemayel family. The Gemayels have long been accused of running the opium production trade which one thrived in the Bakaa valley.

Even though the Gemayels admired Hitler, Israel had supported the ascension of Bashir Gemayel to the Lebanese presidency in 1982, due to his staunch opposition to the Palestinians and Syria. A pro-Nazi Syrian faction assassinated him soon therafter. Nobody ever said that fascists always get along with each other.

(Alternative theorists suspect that Israel arranged the Gemayel killing because he refused to enter into a formal agreement with the Israelis.)

The William Smatt targeted by Novinger appears to be the same person who wrote a strange book called "The Messiah." This tome proclaims George W. Bush, Republican, to be the Chosen One, the new Christ. I'm not kidding. You must see it to believe it.

(Novinger's Smatt operated out of Jamaica, while Bush-loving author William C. Smatt has run for public office in that country, so I think we have grounds for believing the two to be one and the same.)

Check out this review:

It's interesting, however, that this evil twit and his book turn up very few hits in a web search. The only ones that do turn up mention a "Smatt Brothers Jamaican drug cartel," and its connection to the Bush family. Interestingly, the dedication to this "copyright pending" screed is to sweet William's "two deceased beloved brothers Alfred Smatt and Adolph Smatt." Also, at the end of the book is a bizarre plug for the Shaw Park Hotel in Cutlass Bay, Ocho Rios, Jamaica - where Mr. Smatt evidently spends a lot of time communing with god. Coincidence?

A little web-searching reveals that people named Smatt run much of the lucrative tourist trade in Jamaica.

What does it all come down to? As I said, my thoughts are still vague. I don't have an over-arching theory.

All I can do is look at this list -- Richard Rainwater, Jean Succar Kuri, Kamel Nacif, William Smatt -- and then note that these Lebanese-born businessmen have been accused of some very odd things. They all have links to the right-wing power elite. Do these guys know each other?

Or is that a naive question?