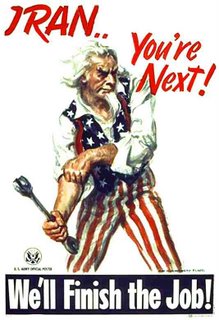 Cannon here: Of course I support Feingold's call for censure, and I'm angry at the Democrats who would not stand with him. Even so, a part of me can understand the skittishness.

Censure may seem politically safe now, with Bush's approval rating sinking toward the 30% mark and points southward. But those approval ratings will skyrocket after the Sears Tower comes down and a good chunk of Chicago lies in ruins. Or after some similar event happens elsewhere.

Let's face it -- a new terror attack is the only thing that can salvage the neocon experiment. Such an attack is therefore inevitable.

We already know who the perps will be (the neocons) and who the fall guys will be (the Iranians). Afterward will come the great round-up of the "America-haters" -- defined as you and me and anyone else who considers Big Brother doubleplusungood. There will also be war with Iran. Nuclear war.

The signs are unmistakable. Come and see:

1. The far-right continually assails anyone who criticizes Bush as working with the terrorists. This accusation seems inane now, but it will take on quite an ominous tone after Big Wedding II.

2. Official propagandist Jerome Corsi, who is surely on the inside, has warned of an Iranian nuclear terror strike within the United States -- even though (as a moment's thought will tell you) Iran has nothing to gain and everything to lose from such an event.

3. No one doubts that the adminstration is gearing up for war with Iran, even though no political will exists in this country to prosecute such a conflict. Obviously, Cheney and co. know full well that an event will soon take place which will create sufficient backing.

4. Bush himself has repeated the false claim that Iran is arming the insurgency in Iraq. (Why would Shi'ite Iran want to undermine the most Shi'ite-friendly neighboring government they've ever known?)

5. Katherine Harris is staying in the race.

Point five may not seem obviously connected to my larger argument. But think about it: Under normal political rules, the woman has zero chance of winning, and no reason whatsoever to waste ten million bucks of her own money. Yes, I know that she has plenty of other dough, thanks to her wealthy husband. Even so, let's be realistic: The rich do not get rich by tossing cash down the garbage disposal.

But Katherine Harris is on the inside. She knows what is coming. She knows that after Big Wedding II, all the normal political rules will no longer apply. Anyone in any race who happens to have an "R" next to his or her name will automatically win in the election held after the next strike.

How "inside" is Kathy? She and Jeb Bush endorsed a strange entity called "Florida Air," an airline which, so far as I can tell, rarely offered actual airline services to members of the general public. Like the Wilkes enterprises, this was a spooky company run by spooky individuals for spooky purposes. From Welcome to Terrorland, written by Daniel Hopsicker:

"The chief and, indeed, only accomplishment of Boehlke and Dekkers’ unsuccessful airline was that it provided a rationale for the presence on the tarmac of the Venice Airport of a half dozen British Aerospace Jetstreams poised within easy reach of Caribbean hot spots. Well, the airline did have one other accomplishment: It was publicly endorsed by then-Florida Secretary of State Katherine Harris..."

At the same time their planes were flying back and forth from Venezuela with illegal cargo Hilliard's charter service was also, unbelievably, being utilized at virtually no cost––despite the fact that rentals for Lear jets can run as high as $1,800 an hour––by Florida Governor Jeb Bush.

Even stranger, both Governor Jeb Bush and Florida Secretary of State Katherine Harris were providing celebrity endorsements to Hilliard's operation well after the company's Lear (N351WB) had been busted by DEA agents armed with machine guns.

One would think a sitting Governor seems well-advised to steer well clear of anything to do with heroin trafficking. Yet Governor Jeb Bush honored Hilliard's operation––called at various times Florida Air, Sunrise Airlines and Discover Air––with a personal visit, even posing for photos with the "Discover Air family."

The company promptly commemorated the memorable event by posting pictures of the visit on their website.

Finally somebody in the Bush camp realized their lethal potential exposure, and the webpage was hastily taken off the Discover Air site.


Think -- think real hard -- about the reason why any covert operator would set up a fake charter airline service. In Florida.

Do you really think that Kathy is going to spend $10 million dollars' worth of her daddy's money?

And do you really think that if IT happens before the election, she will lose?
posted: 10:48 AM